NYIDE’s Applied Study Program and the “Fashion of Performance”

One of the most unique aspects of the New York Institute of Dance & Education’s Applied Study Program is its direct access to people of note in the world of dance and business coupled with the invaluable information that is not only taught, but then encouraged to be applied which allows the candidates to learn a treasure trove of information throughout the course.  On Tuesday, KDT Apprentice & Applied Study Candidate Chelsea Blakeburn and Applied Study Candidate Symphony Quencer gained a new measure of access as they sat in International Producer and American Choreographer Sean McLeod’s Private Studio alongside NYIDE Product Director and McLeod Technique Certified Personality Kierstyn Zaykoski, German Choreographer and NYIDE European Liaison Gregory Livingston, and Sean McLeod himself to begin the 2015-2016 Applied Study Program and MT Sessions.

Sean began the semester with a brief yet pointed talk that inspired and motivated:  “I am not here to teach you how to dance; though you will certainly learn that throughout the program.  I am here to help you become more formidable women, who are not defeated by struggles that may come.  Women who are able to move past the scars of depression, or wash away the anguish of rape and in turn able to succeed in whatever path you choose in life.  Throughout Applied Study, you will learn information like it is coming from a fire hydrant, and it is your job to capture it and harness it.”

The master class now up and moving worked through a Movement Integration series that took normally static exercises like pliés, relevés, and tendus and articulated them into action so that the dancers could understand how to make these elements useful.  After going through the first series once, which to an outsider might have appeared seemingly “simple,” the candidates were sweating hard and loving every minute.  The focus was not on the steps (though correct alignment was stressed), but rather on the intention behind the steps and carrying the “fashion of performance” throughout making each step simply real—not just an exercise or combination. 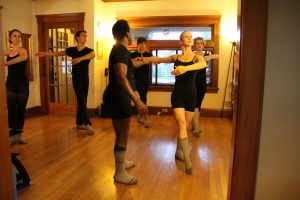 International Producer and American Choreographer Sean McLeod encourages Symphony Quencer (Candidate of the Applied Study Program) to wear the “fashion of performance” instead of simply doing the steps as she dances alongside NYIDE Product Director Kierstyn Zaykoski (front), Applied Study Candidate & KDT Apprentice Chelsea Blakeburn (left) and Stephen & Sean Murray, who also study in the MT Sessions weekly as part of the Family Mediation Program through the Institute.

Throughout the week combinations continued to build using the premise of “strength through the core, the construction of a straight leg and foot strength” because those elements are the foundation of all other movement in dance.  By the second day of the program, Sean took each person and reinforced them in a traditional side tilt.  “I had never even attempted one before,” said Symphony. “I was just amazed he even thought to reinforce me in the position.”

Though there were great leaps in movement capability, the most striking growth was in the emotional disposition and growth of the candidates.  Said Kierstyn Zaykoski: “I have been working with Symphony for the past year through Custom MT Sessions and she has grown significantly.  However, seeing her this week not only dance alongside those of us in the room who dance professionally in NYC as a living, but enter and leave each day with the smile that never left her face and having the ability to communicate some profound lessons she was gaining during the talk arounds reminded me just how powerful this program is.  I know the impact the Applied Study Program had on me, and I am looking forward to seeing how it changes and develops present candidates over the course of the next two semesters.”